The United States of America

Their unpaid labor created the fabulous wealth that is traded here (below).

Slavery transformed America into an economic power. The exploitation of Black people for free labor made the South the richest and most politically powerful region in the country. British demand for American cotton made the southern stretch of the Mississippi River the Silicon Valley of its era, boasting the single largest concentration of the nation’s millionaires.

But slavery was a national enterprise. Many firms on Wall Street, such as JPMorgan Chase, New York Life and now-defunct Lehman Brothers, made fortunes from investing in the slave trade, the most profitable economic activity in New York’s 350-year history. Slavery was so important to the city that New York was one of…

The New Zealand Wars Part 3: The Invasion of Waikato

Part 3 begins by describing an 1863 audience between 16 Mäori entertainers and Queen Victoria – in which she promises to let them keep their land. This meeting occurs, ironically, just 12 days after British soldiers invade Waikato.

By now Governor Grey’s main objective is to kill the Mäori king and destroy the King movement. Although iwi continue to be divided whether to fight or trade with the British, there is now sufficient unity under the King movement to assemble a force of 4,000 warriors.

By lying to British authorities about a fictitious Mäori plot to invade Auckland, Grey requests and receives several armored battleships with canon and thousands of additional troops.

Again vastly outnumbered (by 18,000 British troops), Mäori lose the Waikato War due to a strategic blunder – failing to allow… 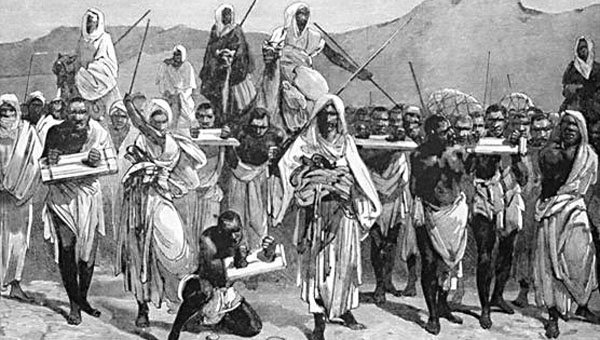 That Arab slavers were the first, and last, in modern times, to ship millions of Africans out of the continent as slaves? Most people still have the so-called Transatlantic [slave] trade by Europeans in mind; but, in reality, Arab-Muslim slavery was much greater.

Even in the face of years of Black History Months, currently there still remain Earth-occupants, many of whom know little-to-nothing about the expansive role, played by Arab and Muslim slavers in the African slave trade.

The Wairau Valley War started when British settlers in the Marlborough Sounds (top of South Island) tried to farm land that still belong to Māori. After local iwi (tribes) drove out the land surveyors and set fire to their huts, 50 armed settlers marched to the Wairau Valley to “teach Māori” a lesson. Te Rauparaha, aka the Emperor of the South,* organized iwi warriors on both sides of Cook Strait to repel them.

Castillo, who participates in the World Encounter Against Imperialism, remarked that there is a systematic massacre occurring in his country.

23 January 2020 (teleSUR)* — Colombia’s Indigenous people are outraged at the death of more than 20 social leaders inside South American country,  the counselor of the Indigenous Youth of Colombia , Eliel Castillo, said this week.

“Aboriginal and non-Indigenous Australians all understand that by lowering a flag we acknowledge that something has died or that something is dying. It is a symbol of mourning. There are so many people who are feeling anguish.”

Lost Country: Aboriginal Flags Have Begun Flying At Half Mast Around Australia

DON’T MISS ANYTHING! ONE CLICK TO GET NEW MATILDA DELIVERED DIRECT TO YOUR INBOX, FREE!

An Aboriginal woman from Victoria is hoping that First Nations people and organisations around the nation will join her university in flying Indigenous flags at half mast, to acknowledge the grief Aboriginal people are feeling at the destruction of Country from Australia’s ongoing bushfire crisis.

Associate Professor Gabrielle Fletcher is a Gundungurra woman from the Blue Mountains of New South Wales. She’s also a Professor in Indigenous Studies and…

Chief Black Kettle and the Southern Cheyenne, with their Arapaho allies.

* Colonel Chivington was a Methodist preacher, freemason, and opponent of slavery, with an intense hatred of Native Americans:  “Damn any man who sympathizes with Indians! . . . I have come to kill Indians, and believe it is right and honorable to use any means under God’s heaven. . . . Kill and scalp all, big and little; nits make lice.”

* Chief Black Kettle flew an American flag over his lodge to show his friendly intent.  He wanted peace.

* In 8 hours the Cheyenne way of life was changed forever.

* 675 soldiers attacked a village of 700 predominantly elders, women, and children while the…

Invasion is about an incursion into Wet’suwet’en earlier this year by Canadian police armed with assault weapons. This followed an injunction a British Columbia court granting  petroleum companies authority to build a network of oil/gas pipelines across their land. Since none of the Wet’suet’en clans have ceded their land to European settlers, the injunction is illegal.

Despite the arrest of 14 clan activists, the standoff continues, as the local clans complete construction of a four-story healing center near one of the proposed pipeline routes. The arrests have triggered support protests by indigenous people and environmentalists across Canada and in the US.

On Monday [October 13 2014], America’s government offices, businesses, and banks all grind to a halt in order to commemorate Columbus Day. In schools up and down the country, little children are taught that a heroic Italian explorer discovered America, and various events and parades are held to celebrate the occasion.

It has now become common knowledge amongst academics that Christopher Columbus clearly did not discover America, not least because is it impossible to discover a people and a continent that was already there and thriving with culture. One can only wonder how Columbus could have discovered America when people were watching him from America’s shores?